Isla Isabella provides just over 2.6 acres of fully developed private island real estate in Belize. It sits on the Blue Ground Range, a beautiful island archipelago approximately 8 mls off the Southern Coast near Jaguar Reef, due east of Hopkins Village and Sittee River. This stunning private island has already been cleared, dredged filled and is ready to build on with lots of space available to expand on. Dozens of lush coconut palms and other coastal trees are generously scattered throughout the island and were planted in drums, filled with black soil that were placed in the ground when the island was being filled.

The island is surrounded by a host of other nearby islands within the Blue Ground Range, that provide a natural defense against hurricanes and major storms. In additional these natural shields, almost the entire island is fortified by a seawall made of pre-fabricated cement slabs and posts tied together with a cement beam that runs all around the northern, eastern and western edges of the coastline. The island’s sandy ,south end beachfront is protected by two concrete breakwaters that extend outward up to 75ft from the shore.

A large, over-the-water, thatched roof restaurant and entertainment center is elevated on pre-fabricated cement pillars with ample space to hold up to 20 seated guests and boasts stunning views of the ocean and the surrounding islands from its 360 degree wraparound deck. The structure is made of pressure-treated pine and houses a bar, kitchen and bathroom for guests.

A two-storey workers quarters sits at the southwest corner of the island with two separate bedrooms, and a bathroom on the upper level and a small kitchenette and storeroom down below. It can accommodate up to 8 staff members and also houses the water pump that supplies water to all buildings. Rounding out the island’s existing structures are a concrete generator house and a concrete BBQ/recreational palapa that guest can enjoy.

The island sits less than 30 minutes from the mainland, with an outstanding location that puts you in the perfect position for a magnificent and unexpected treat… a perfectly clear view of Victoria Peak, the second tallest and most famous mountain in Belize, directly in line with the dock on the western side of the island.

Isle Isabella is an exceptional location for a boutique private island resort or secluded island getaway in Belize. 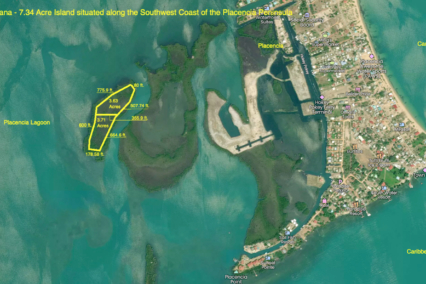 Cayo Theana – 7.34 Acre Island along the Southwest coast of Placencia 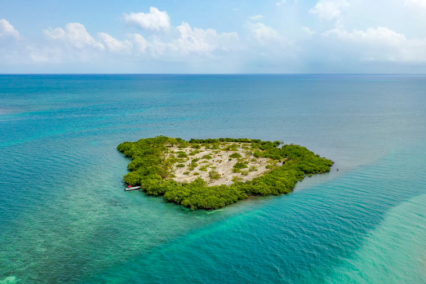